You might have heard about the Baja lagoon whales in hushed tones among the most intrepid of explorers. A remote lagoon in the Martian desert landscapes of Baja California, San Ignacio has the world’s most unique gray whale watching experience (more on that later). In celebration of these gentle giants, we’ve compiled some of our favorite gray whale facts; a gray whale 101, if you will. Whether you’re wondering what route gray whales travel during their migration or pondering how fast gray whales swim, read on to find out more fun facts about gray whales… 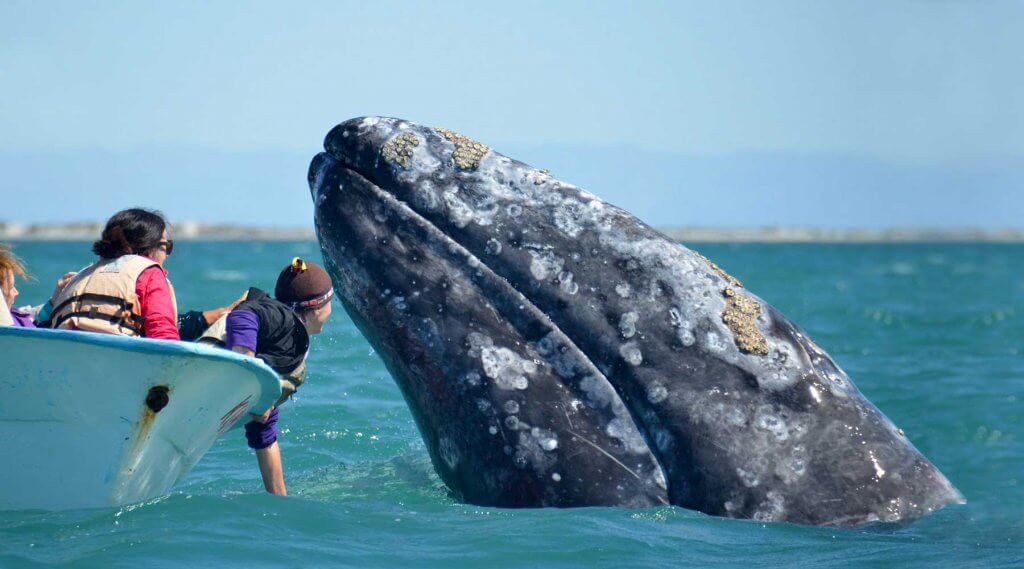 Gray whales (Eshrichtius robustus) reach 40-50 feet in length and can weigh as much as 40 tons, which is the equivalent of about 60 cows on a (very large) scale. An average whale’s life span is between 55 and 70 years (cows, on the other hand, only live for around 22 years). Gray whales are believed to have the longest annual migration of all mammals. Each October, these gentle giants embark on a whopping 5-6,000 mile journey (at an average speed of two to six miles-per-hour) from the frigid Arctic waters to the warm, protected lagoons of Baja California Sur to mate and calf their young. San Ignacio lagoon is one of the last undeveloped gray whale birthing sites on the planet, and has been designated a UNESCO Heritage Site.

3. Why Are Baja Gray Whales So Friendly?

Usually incredibly shy, the gray whales in San Ignacio Lagoon are unusually friendly and curious. While we aren’t sure why, mothers are passing this unique whale culture to their young and it is a truly magical experience to be a part of; looking at a 45-foot gray whale in the eye is a truly life changing experience. The protection of this whale nursery comes first and foremost, and while wildlife should usually always be appreciated from a distance, San Ignacio Lagoon is unique in that the whales completely run the show. We do not seek out their interaction, they will approach our pangas to be stroked and petted – they appear to enjoy it just as much as humans! Most females will begin to calve whales at around eight to nine years old, and will birth a single calf every two years. Pregnant females are the first whales to arrive in San Ignacio, and their pregnancy lasts 13 months. Newborn gray whale calves are generally born in the sheltered lagoons of Baja California around January. It appears that mothers choose these protected, shallow bays to protect their young from predators, such as sharks and orcas.

Baby gray whales, otherwise known as calves, are anything but minute. A newborn gray whale can reach about 15 feet in length and weigh as much as 2,000 lbs, which is roughly the same size as a 1979 Volkswagen Beetle. The calves nurse for seven months.

Gray whales are baleen whales, meaning they filter food through baleen plates. However, they differ from the other two baleen whale families in their feeding habits, as they are primarily bottom feeders, gulping sediment through their baleen to gulp down crustaceans. They do also skim plankton from the surface waters, especially in their northern feeding grounds.

The barnacles found on a whale’s skin are as unique as a human’s fingerprints, and scientists use them to track individuals. While we’re on the subject of their skin, they owe their colorful pattern of scars to the parasites and organisms that colonize their skin.

In the 1800’s gray whales were subjected to whaling, especially in Magdalena Bay, where they were given the nickname “devil fish” due to their aggressive rejection of harpoons. Since 1949, they have been protected from whaling by the International Whaling Commission and are no longer hunted on a commercial basis.

Have any fun facts about gray whales you want to share? Interested in gray whale watching in San Ignacio Lagoon? We’d love to hear from you, get in touch today.

Whales of Baja
Whether witnessing these giants defy gravity as they corkscrew out of the ocean or the tender intera...

An Unusual Oasis in the Desert: Salt Flats of Mexico
There is a beautiful vista of salt flats extending in all directions and very visible when flying in...